It’s all about Husky riding! | Blog

There’s lots of fun to be had on a winter snow holiday – think skiing, snowboarding, ice skating, tubing, curling and more. But if you’ve never tried Husky riding, this season might be the time to give it a go.

Husky riding, dog sledding, mushing. Whatever you call it, being pulled on a sled by dogs is guaranteed to give you a thrilling ride.

What is Husky riding?

Husky riding is when a dog sled is pulled by dogs over the ice or snow. Over the years, dog sleds have been used to transport supplies, in races, by police to maintain order (around gold mines in the 1800s), in military operations, and as part of search and rescue teams.

Today, they are most commonly used recreationally and winter holiday makers can include dog sledding as part of their trip. You can either learn to ride the sled yourself, or enjoy the ride while the dog team take the reins.

Where can you go Husky riding?

Husky riding is a once in a lifetime experience for most of us, so you want it to be perfect. That includes everything from having the right winter sports insurance to finding your ideal

Wherever you go, it’s going to be cold. To help you decide where to go, here are some of the most popular places to go dog sledding around the world.

Unsurprisingly, Alaska is one of the most popular destinations for dog sledding. It’s also home to the annual Iditarod Trail Sled Dog Race that runs from Anchorage to Nome (a distance of 1,150 miles). You can try Husky riding any time of the year in Alaska, but if you really want a challenge, try it during the winter months.

The jagged peaks and huge glaciers that make up Norway’s landscape create spectacular ice mountain kingdoms. And to be pulled by Huskies in the mysterious Arctic night light can be a dreamlike experience. If you time it right (and are really lucky) you might also get to see the Northern Lights while you’re there.

With its glacier-filled landscape, Greenland has a long history of dog sledding. Here, you get the chance to go Husky riding with the real deal: Inuit hunters. Trips include options to see wildlife, sleep on ice or just go out for the day.

Mushing (as it’s known in Canada) is a great way to explore its vast untamed wilderness. Travel a few hours out of the lively cities and you’ll find an environment perfect for a sledding adventure. Head out on a one or two-day safari, or take on the challenge of a four- to 15-day expedition.

Straddling the Arctic Circle, Finland is filled with lakes, forests and wild nature as far as the eye can see. A winter dog sledding experience here offers you Christmas card scenery, clear skies (hopefully) and a peaceful magic that’s hard to beat.

Which breeds are the best sled dogs? 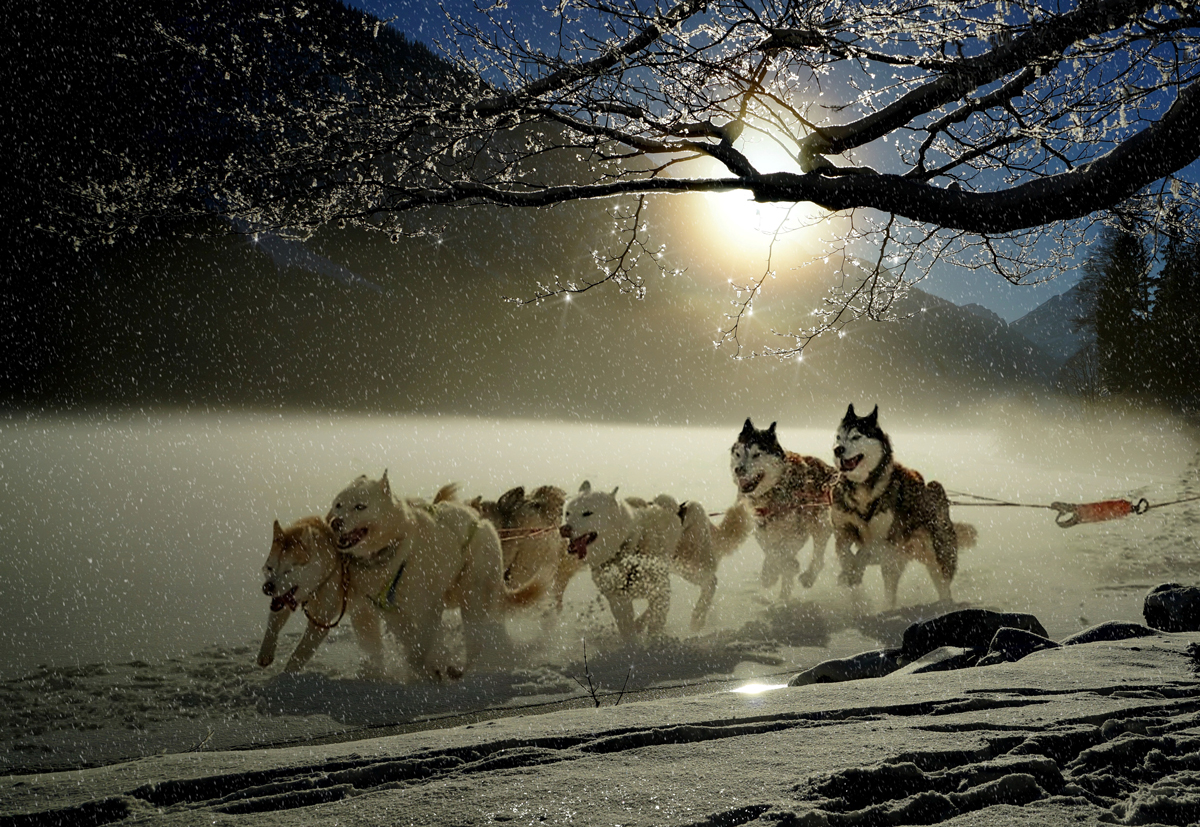 At one time, the word Husky was used to define all northern sled dogs. These canines can travel long distances with ease – trotting at a steady pace for days if necessary. They are suited to harsh winter conditions and individual dogs are chosen based on their performance rather than their breed.

The Siberian Husky is the breed most associated with pulling a sled, but Alaskan Malamutes and Canadian Eskimo Dogs are also considered true sled dogs too.
Of the three, the Siberian Husky is the fastest. The Alaskan Malamute is the strongest, but slower than the other two. While the Canadian Eskimo Dog is hardy and not as stubborn or likely to wander off as the others.

The role of Huskies in sledding

In dog sledding, each dog has a role to play. The lead dog stays at the front of the pack and is the most intuitive and able to direct the team behind it. Directly behind the lead dog are two swing dogs that help navigate turns. The team dogs are positioned in the middle and help power the team. The strongest dogs are placed at the back of the pack and are called wheel dogs.

Sled dogs are well looked after from birth to old age. The general rule in the world of dog sledding is to let a dog run as long as its health is good and it wants to go. This means teams of dogs are a mix of young and old – the younger dogs providing the power and the older dogs the wisdom. 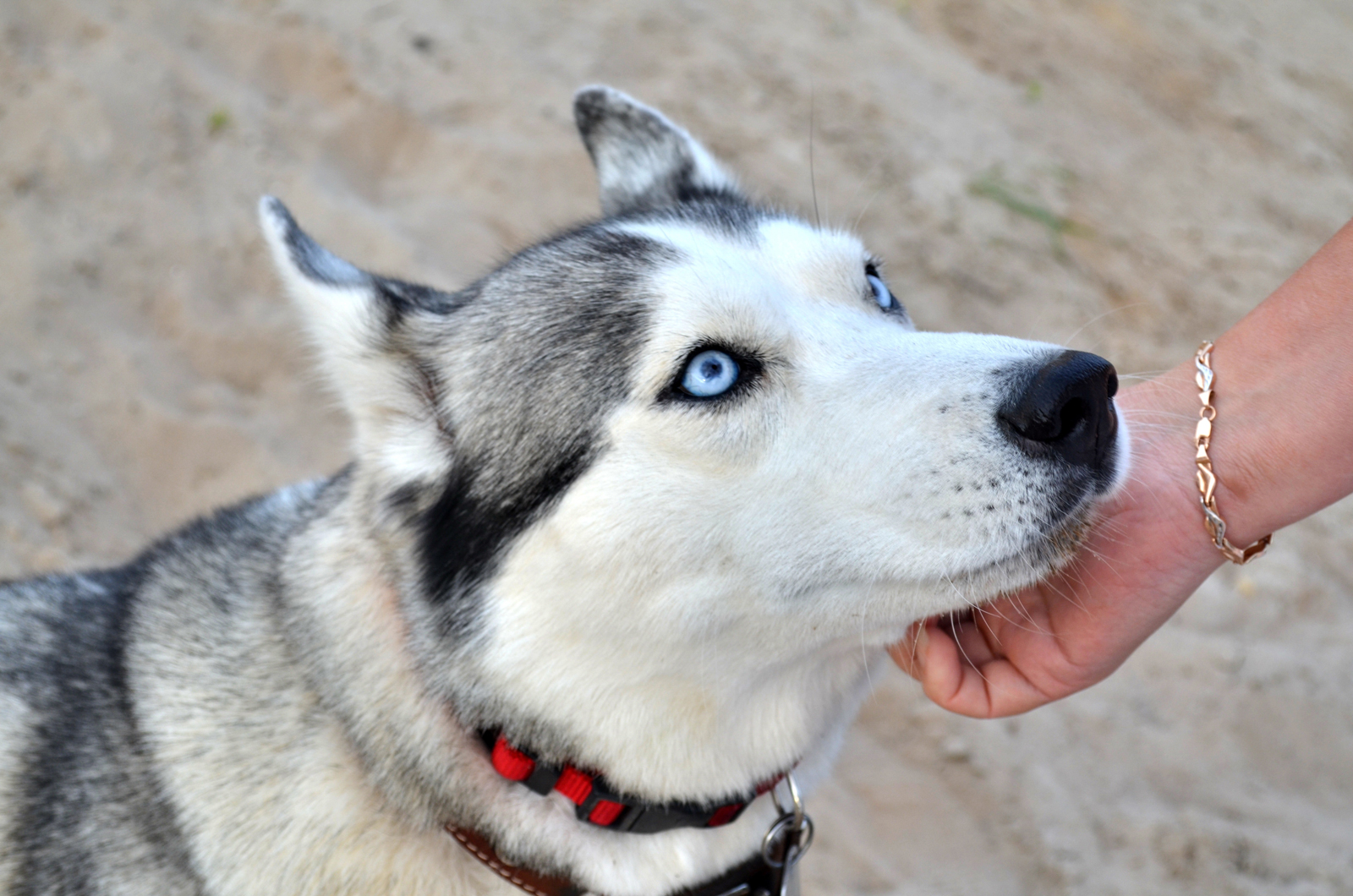 Sled dogs have been around for generations and are physical marvels – able to endure extreme conditions for a long period of time while pulling more than their own weight.

Huskies are affectionate and energetic, and have character traits that require a lot of care. This can make looking after them a challenge. Here’s how to look after a Husky.

·         Exercise: Huskies were bred to run long distances without tiring, so need plenty of exercise and space to roam.
·         Food: Huskies can easily consume up to 10,000 calories a day when pulling a sled.
·         Grooming: Huskies shed their fur constantly – and there’s a lot of it to shed. They need to be brushed regularly – once a day during high shedding seasons (spring and autumn).
·         Sociable: Huskies are pack animals, bred to exist alongside other dogs and humans. They enjoy being in the company of other Huskies.
·         Training: Huskies are intelligent animals that can be trained, but it takes patience, consistency, determination and commitment.

A popular myth about Huskies is that they’re part wolf or are less domesticated than other breeds because of the way they look. However, like other dog breeds, Huskies have been domesticated for thousands of years. In fact, research has revealed that Siberian hunter-gatherers were breeding dogs to pull sleds around 9,000 years ago.

The reason for their wolf-like appearance is that Siberian Huskies and Greenland Dogs share more ancestry with the Taymyr Wolf than any other breed. This has led many scientists to believe they were among the first types of domesticated dogs in existence.

For lots of people, Husky riding is something that’s been on their bucket list for years. To get the most out of your dog sledding experience, it’s good to have the right winter sports insurance in place.

Get in touch with the team at Insurance Choice to find out what winter sports insurance is right for you.
Contact us